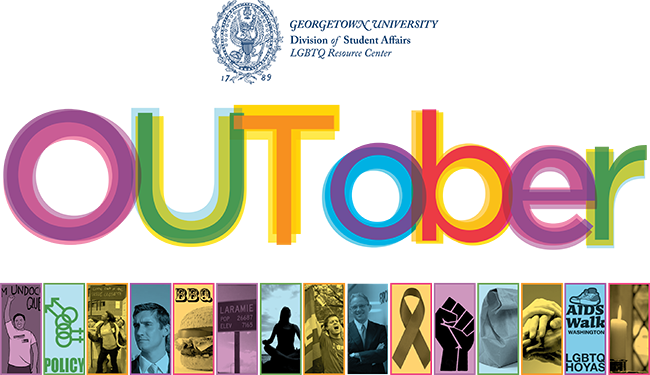 For many LGBTQ DREAMers, being undocumented and gay presents unique obstacles to finding acceptance and community at Georgetown and beyond. This event will highlight the intersection of life for undocumented LGBTQ immigrants and bring greater visibility to a group of people who have traditionally lived in the shadows. Time: 7:00pm Location: McShain Large, McCarthy Hall Audience: All

For years, the bisexual community has largely been excluded from discourse on issues such as same-sex marriage, adoption by same-sex couples, and the question of “choice” of one’s sexual orientation. This panel will discuss the role of bisexuality in redefining discussion on civil rights, queer visibility, and equal protection, as well as raise awareness of the reality of being bisexual. Time: 4:00pm Location: McDonough 200, Law Center

October 11, Coming Out in Red Square

Five years ago, the Out for Change campaign worked hard to make Georgetown a more inclusive place. Today, coming out on campus still presents unique challenges. This event will feature a door through which students “come out” as proud LGBTQ and Allies. Be sure to wear your ‘I Am’ t-shirt throughout the day to promote visibility and awareness about LGBTQ life on campus! Time: All Day Location: Red Square

Mr. Cobb works closely with Congress and the Obama administration on a range of LGBT issues including marriage, Don’t Ask Don’t Tell, and international issues. Here, he will discuss the state of federal LGBT Policy and his work at the Human Rights Campaign — the country’s largest LGBT civil rights organization. Lunch will be provided. Time: 12:00-1:00pm Location: Old North 205 Audience: Graduate Students p>

The Community Barbeque is an opportunity for LGBTQ students and allies to get together in a celebration of LGBTQ life on campus. We’ll unite in one place to enjoy food, drink and each other’s company. This event will host members from the LGBTQ organizations across all of our campuses: the LGBTQ Center, GU Pride, GradPride, OUTLaw, HoyaMedAlliance, PPOUT and GALA. Time: 5:00pm Location: Leavey Esplinade Audience: All

In 1998, college student Matthew Shepard was brutally murdered in what became one of the most publicly recognized homophobic hate-crimes in America. We honor his memory by watching ‘The Laramie Project,’ a film about the aftermath of this tragedy. Following the film there will be a discussion on hate crimes and the status of homophobia in our lives today. Time: 3:00pm Location: 325 Leavey Audience: All

Gay or straight, life on a university campus can bring with it a lot of stress. This session will feature tailored meditation instruction and practice to target stress and other issues, along with peer-facilitated discussion on the power of mindfulness in our lives as LGBTQ and Ally humans. No meditation experience is necessary. Time: 8:00pm Location: Makóm (Leavey, North Gallery) Audience: All

Moderated by Ricardo Ortiz, Associate Professor in the English Department, this conversation with University President John J. DeGioia will mark the 5-year anniversary of the Out for Change Campaign and the President’s subsequent Town Hall on LGBTQ Student Resources. Joining us will be alumni, staff, faculty, and current students. Light reception will follow. Time: 3:30pm Location: Riggs Library Audience: RSVP Requested

As one of the most senior openly-gay officials in the Obama Administration, Chairman Hochberg will discuss LGBT policy issues within the Administration, how he sees the LGBT movement moving forward, and his time at the Ex-Im Bank. Following Chairman Hochberg’s talk will be an open Q&A session. Food and drinks will be provided. Time: 6:00pm Location: Old North 205

Moderated by Dean Martin Iguchi, Ph.D., Nursing & Health Studies, this panel will focus on the experiences of young people as they discover their HIV status and come out as positive to friends, family, partners, and heath care providers. This event is critical to all members of the community as we work to dispel ignorance about this widespread epidemic. Time: 7:00pm Location: ICC 121 Audience: All

October 23, Come Out and Do Something

As the epicenter of American political life, Washington is no stranger to LGBTQ activism. An important part of that work is done at the grassroots level by organizations that on this night will engage with Georgetown students about their activism in DC. Each organization will talk briefly about its work, past and future projects, and what opportunities you as a student have to get involved. Time: 6:30pm Location: McShain Large, McCarthy Hall Audience: All

As Georgetown has made strides in its progress toward greater inclusion of the LGBTQ community, we must recognize the vital role that LGBTQ staff and faculty have played. This lunch will give you an opportunity to connect and share the unique experiences that being a staff & faculty member of the campus community provide in the face of the changing culture of LGBTQ life at Georgetown. Time: 12:00-1:00pm Location: Leavey Program Room

October 25, Coming Out as an Ally: Beyond the Basics

There’s a lot more to being an ally than just having gay friends. This presenta- tion and workshop will explore what it really means to be an ally from standing up for justice and celebrating a victory to awkward moments and missteps. Student leaders from around campus will share their experiences and knowledge and guide you through skill building scenarios. Dinner will be provided. Time: 6:00pm Location: Bulldog Alley Audience: All

AIDS Walk Washington is a 5K fundraising walk and run to benefit Whitman-Walker Health, a nonprofit community-based health organization for those infected with or affected by HIV/AIDS. In a city where 1 in 20 adults has HIV and 1 in 4 doesn’t know it. The AIDS Walk plays a vital role in raising funds to fight this epidemic. Register: aidswalkwashington.org Join Team: LGBTQ HOYAS Audience: All

LGBTQ people of faith and their allies come together in a prayer service meant to give thanks and praise. This event will feature speakers and chaplains from the various faith traditions with a presence on campus. The event will also include a candlelight vigil in memory of all the victims of violence in our country and across the globe. Light refreshments and fellowship will follow our time in prayer. Time: 5:00-6:00pm Location: Makóm (Leavey, North Gallery) Audience: All